You may not be able to make a silk purse out of a sow’s ear, but you can certainly sauté it with a string of pearls–pearl onions, that is.  We’re not browning the pig meat in this wild pig soup recipe, because the caramelized onions add so much other flavor we don’t need the browning/enriching caramelization of the meat too.  And this way the meat stays moister.  The other interesting thing about this recipe is that it’s basically Italian, but there’s no tomato.  It makes for a different, in-your-face flavor than the usual tomato-based sauces of southern Italy that we are so familiar with.   One other note: the best tasting pigs are smaller.  One reason why John and I don’t go for the big tuskers much.  It only takes a few minutes to take that trophy photo, but eating season lasts a long time.

FYI: If you have no wild pig in your freezer, lean commercial pig or wild turkey will work well, too.  No reason not to try this lovely winter  treat.

Yields: about 9 cups/2 quarts plus 1 cup

PS: This recipe is from my new cookbook The Wild Bowl:100 soups, stews and chilies for wild game.  Half the book is dedicated to venison recipes, with the other half divided into wild bird recipes, waterfowl recipes, bear recipes, wild turkey recipes and, of course, wild pig recipes.  Is your favorite wild game recipe a chili?  There are at least 24 wild game chilies in The Wild Bowl, plus some soups and stews that aren’t labeled ‘chilies’ but have a definite chili bite. 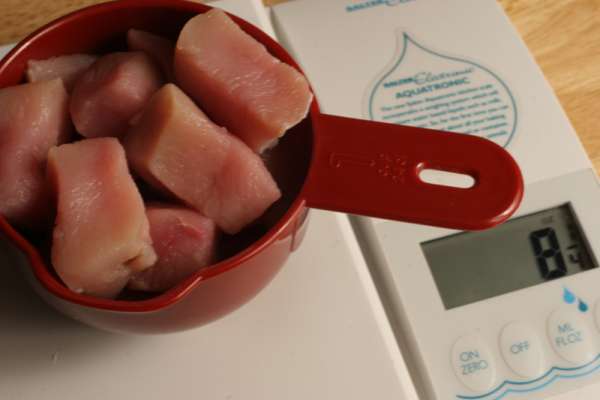 If you don’t have an electronic scale in your kitchen, there’s an easy way to ‘weigh’ your meat.  Two cups of chopped meat is about 1 pound. So for this recipe, that calls for 1 ½ pounds of wild pig, 3 cups is close enough.

That photo you clicked on to open this recipe? Doesn’t the meat look luscious? There’s a reason. Usually when you make soups, you brown the meat. In this one, I call for browning the onions, not to the point of burning, but browned. On more than one side.  That gives you the sweet caramelized taste the dish needs, while leaving the meat as moist as you can.  Commercial meat wouldn’t need this, but wild pig is pretty lean, and if you use wild turkey instead, even leaner. 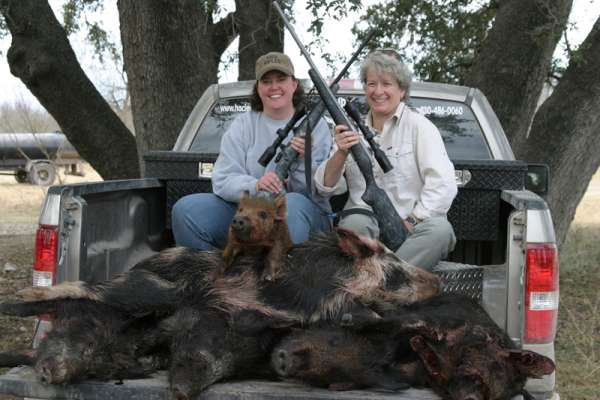 I posted this photo earlier on the Pozole post, but I thought I’d tell you the story behind it.

One year I wanted a really young pig to put on my water smoker.  John was after a medium sized pig so I paired up with my friend Sam Mann, and we spent several evenings together, trying to catch a dumb young pig.  The locals said, ‘Just shoot the Mama and the babies will hang around.’  Well, we did, and they didn’t. In fact we began to think the pigs were onto us, having shot one Mama, her four little pigs—two on each side of the corn feeder—zipped into the cover. The ones on the right, zipped left. The ones on the left zipped right.  Sam and I were left stunned at the speed of their exit.  even with the guns pointed in the right direction, not a chance at a shot.  Then not 10 seconds later, the 2 that had zipped left zipped back across the opening as, at the same second, the two that had zipped right crossed back to the left.  Like a silent movie at warp speed.  We were done, Sam and I, cracked up, laughing, done for the night.  Unloaded our guns, picked up Mama and headed back to the ranch for a good stiff drink. But you’ll notice there is a quite small pig on top of that pile of eating pigs.  That one went on the water smoker and was incredible.

PS  Sam is an avid hunter, just like her brother Richard Mann who’s a very knowledgeable gun writer. (Comes from being a railroad cop and an MP.)  Check out his blog https://empty-cases.com/blog/

Winging It: A Wild Game Bird Recipe and Video