This week’s blog entry started out as an experiment. I wanted to know if a combo of spices would work in a sliced venison steak recipe I had in mind. Since I’m working on a soup cookbook, my first thought was a tasty venison soup recipe with a Tex-Mex twist.   So I mixed the spices, sautéed the meat, then before I’d plotted my next move, ran into a hot trend on the internet.   It’s named #Tortilla Trend, don’t ask me why, and it’s been ‘trending’ on TikTok, and don’t even ask me what TikTok is.  (All I know is I was going to need another ^%$# password…. And that’s not happening.)

But, truthfully, the #tortilla trend looked very interesting, and would be a perfect venison quesadilla recipe.  So, with this seasoned meat already in the skillet, I told John we were having something different for lunch.

I gently heated a couple of flour tortillas in the  microwave,  got out some  cheese, salsa, sour cream, cilantro and started thinking—this would be great for breakfast too: starting with some venison sausage, like brats or a simple sage breakfast sausage, plus bacon, eggs, cheese, more cheese… sliced jalapeno pepper….

But first things first: this #tortillatrend.

It’s a simple thing to do. You set a flour tortilla on a plate, warm it 15  seconds in the microwave so it folds easily  without breaking, then, in your head divide the tortilla into quarters, like 15 minute intervals on a clock; 12, 3, 6 and 9.   Cut the tortilla from the center to 6 o’clock.  Now spread your ingredients, quarter by quarter on the tortilla.  Starting with the 6 to 9 quarter, with something that will stick to the tortilla—like guacamole or the sour cream/cilantro spread below–gently fold that quadrant up over the 9 to 12, then the 9 to 12 over the 12 to 3, gently folding quadrant over quadrant, rotating clockwise around the face of the tortilla.  You now have a very thick multi-layered triangle, with a layer of tortilla between each element of the filling—a cross between a club sandwich and a quesadilla.

While I love quesadillas, the advantages of this #tortillatrend became obvious.  One, it’s easier to handle: instead of being 10 inches around—and needing both open hands to hold it—it fits easily in one hand.  Easier both to get it to the pan, and to flip it.  Each folded tortilla can be totally different, either with Mom and Dad’s favorite ingredients, or the kids’, or just a variety in venison recipe flavors for one person. John and I have eaten at least 5 varieties this week alone. And remember, with a freezer full of wild game meat, variety is a great thing.

Three, the ingredients stay separate, so each individual flavor is more obvious.  And, finally, it’s walking around food, which a quesadilla is not.

Oh and it’s also a great venison quesadilla recipe. I had some pretty tough steak to start with, so cut it into very small bites before quickly browning it. It was a surprise bit of toughness (from one of my damage hunt cow elk which were otherwise very tender) or we would have tossed it into the burger pile on butchering day.  There I was with the steaks thawed, and not wanting to pull out the meat grinder, and then clean it all up, I decided cutting the steaks up very small, essentially mincing them, was the more efficient option.  You could also use venison burger if you happen to have more ground venison than steaks in your freezer.  Minced steak or burger is also handier for finger food: no messy strings of food dropping in your lap or on your shirt.

Once you’ve made your first one, you’ll see which layers end up deep inside, and set it up so any cheese quadrant that needs to melt, will end up with only one layer of tortilla between it and the hot skillet.  Don’t worry, it will be obvious.

This is what we did with ours, but you can also add sliced jalapeno peppers, nopalitos, bacon (it’s the new black—it goes with everything),  or turn the whole thing upside down and put Italian sausage, mozzarella and grated Parmesan, sautéed peppers and onions, and pepperoni in a #TrendyTortilla.  OMG. 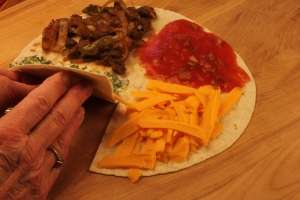 Try this delicious venison quesadilla recipe for your next meal. It's sure to be a big hit with your entire family!

Want to make your own venison sausage for this #tortilla?  The brats and breakfast sausage I mentioned are both in Sausage Season along with a lot of other venison burger, waterfowl and upland bird sausage recipes. https://www.riflesandrecipes.com/product/wild-game-sausage-recipes/