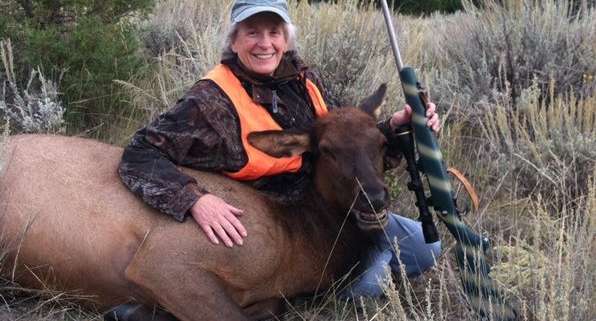 Are one-ingredient venison marinades simple enough?  The steaks and roasts on this cow elk I shot in 2014 were tender and delicious, but while cleaning and defrosting the freezers last week we found a few packages of stew meat from that cow, and it was tough enough I was wishing I’d ground it all into burger.  Still not as tough as that musk ox John shot years ago with the Inuits. We had hunted in a family village, Dads guiding, Mom’s drying meat for the winter or cooking for us Dudes and Dudettes, kids helping wherever and running around laughing.

We brought home a hindquarter and backstrap of John’s old bull. It tasted fine, but was tougher than nails. So tough I set a half-inch thick slice of backstrap in my FoodSaver power marinator with some tasty liquid and set it on 4 minutes, then another 4, then 24 and, as I remember, another 24 minutes, until the individual grains of meat had separated, resembling inch-long pieces of twisted flossing tape, but were still too tough to chew.   So we ground the rest into burger.

The cow’s stew meat wasn’t that tough, and it tasted good, so just a bit of a marinade was all it took to make it tender enough for even a quick grilled-steak or stir fry.

Ginger ale (just be sure it has ascorbic acid in it), pureed honey dew melon and butter milk are my three go-to venison marinades when I don’t want to add flavor that might conflict with the cooking spices.  Leftover, cold coffee is a fourth, but I can’t drink it or eat a steak marinated in it after noon, or I’ll be up all night.  Since we have our big meal at lunch, that works. If you’re the kind of person that can drink coffee before you go to bed, have at it.  The coffee does add a slight flavor, but it’s a richer deeper flavor, which is good as a venison addition.

As for the buttermilk, a lot of people use milk as a marinade to calm gamy flavors, but buttermilk also has acid that tenderizes.  I’ve used buttermilk a lot in venison marinades for a ‘veal’ dish, like veal parmesan or veal piccata.

All you need of each is enough to cover the meat completely, and depending on how tough the meat is, 24-72 hours of marinating in the refrigerator.  When you’re ready to cook, drain the marinade and pat the meat dry with paper towels. (Do rinse off the buttermilk, before drying the meat with paper towels; no need to rinse the other three before drying.)

And how to cook these marinated venison steaks?  Grilling season is over in Montana, but John and I have been quick frying half to ¾ of a pound of small venison steaks in a skillet on medium-high, with a bit of oil till rare to med-rare, then transferring them to a foil-covered-plate to keep warm while we add 3-4 tablespoons of butter to the pan and sauté 8-10 sliced mini-portabellas until tender.  We then return the mini-steaks to the pan, spoon the butter and mushrooms over them and voila, it’s lunch.

Need more? Tenderize the Wild my all wild game cookbook has 100 marinades, brines and rubs for all your game plus a bunch of side dishes for a completely delicious meal. Venison rubs and marinade recipes, elk recipes, pheasant recipes, duck marinades, goose marinades, turkey brines, Check it out:  https://www.riflesandrecipes.com/product/tenderize-the-wild-marinades-brines-rubs/