Blog - Latest News
You are here: Home1 / Wild Game Recipes2 / Wild pig, a stick, and fire. Anyone need a rub?

I love soy sauce-based kabobs as much as anyone, but with two hunters in the family, we tend to eat from our freezers 360 days a year. So variety is essential, and this wet rub certainly provides it.  Actually it’s not ‘wet’ so much as damp.  Tossing all that garlic into a mini grinder creates a paste that really sticks to the meat.  That’s good.  It’s also very tasty.  Which is also good.

And while this is a great wet rub for wild pigs, it also works for that other white meat–pale-meated upland birds.

Lots of questions: What are you hunting? What’s in your freezer?  How warm is it outside? Is your propane tank full? Your grill ready for another season?

Here’s an answer for a question you didn’t ask: Piggy on a Stick.

Need another answer? Depending on sex, 0-250 pounds.  Sows usually taste fine up to 250; boars up to 150.  With wild game there’s no absolute, but we’ve followed that rule for years, and never had to toss dinner in the garbage. Though I admit the piglet I brought home from the Texas hunt with Sam Mann was the best tasting and most tender, there wasn’t much meat on it, and Making Meat is important (i.e. filling the freezer.) It’s a balance, like all of life.

The first pig either of us took was a wild boar John shot in California when our Lab Keith was a pup. Around 1988.  (Are we the only ones that remember stuff based on what bird dog we had, and how old he was?) 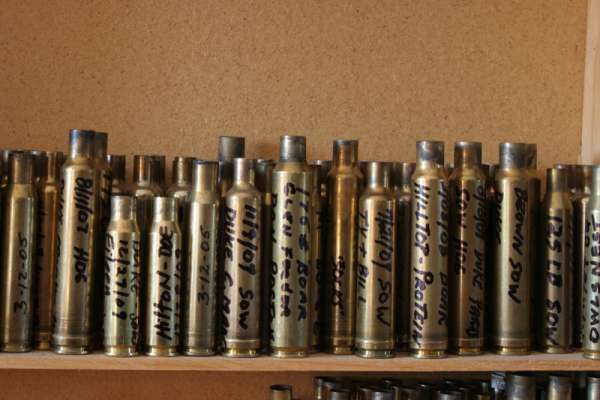 I was lucky enough to hunt a small ranch in Texas that belonged to a really avid hunter. He kept a journal of every time he went hunting: what the weather was, what he saw, what he killed—if he killed. If you hunted on his place, he asked that you do the same. I spent one evening just reading back through the pages. And enjoyed every minute of it. The shelf above the journal was educational as well: every case was marked as to date, sex, where the animal was taken and species, since there were also whitetails on the place, and a few feral cats that preyed on bird nests.

We were both Montanans to the core, and wild pigs, at that time, didn’t exist in Montana.  (They’re now in Canada of all places, and making occasional appearances in Montana.)  So getting a pig, to us and the owner of the property, meant taking a boar of some size. Big enough for trophy photos. Big enough to have lots of meat. We did, but when the landowner realized we were taking the meat home, he made a suggestion. “Start up an old grill you’re about to toss, and wait for your neighbors to go to work. When they’ve all gone, cook it. If it doesn’t stink up the neighborhood, it might be okay.”

Despite being a 400+ pounder, the boar did not stink up the neighborhood. But he was tough, very, very tough, so I ground and wrapped him up and used him for burgers, chili, tacos and such.

That boar had very little fat, but most wild pigs have quite a bit and unlike venison fat, it’s often tasty.  In fact wild pigs have the most fat of any of our wild game, even bear, so careful wrapping is essential in preventing freezer burn.  Fat turns rancid faster and gets freezer burned faster than lean muscle meat, and holding constant temperature–no matter how often or long you open your freezer–is a big factor in frozen meat quality. (Given that grinding produces a higher percentage of surface area per pound, ground meat whether venison, bear or turkey gets freezer burned faster than larger cuts of meat.) 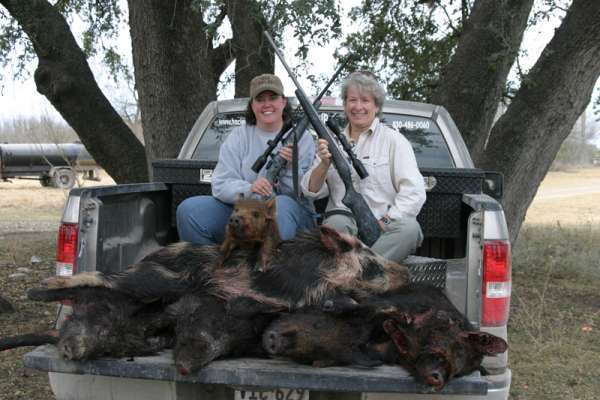 Another trip to Texas I met Sam (Samantha) Mann. If you’ve run across Richard Mann’s posts and magazine articles, Sam is his equally hunting-addicted sister. I told Sam I wanted a small pig rather than a trophy. (Being a foodie, I was curious. It’s why I also ‘wasted’ a moose tag on a heifer and an antelope tag on a fawn. I wanted to see if the taste was different. It was. More like veal in the case of the red meat, spoon-tender with the little pig.)
Anyway, she joined right into my quest. The result was a pile of good eating sows, but and the little guy on top of the pile.

Upright freezers are not nearly that good at being constant.  One year a friend decided to upgrade the family’s antique chest freezer, transferring all their game into their newer upright. Sometime later she sent me a note: “I always wondered what you were talking about when you mentioned freezer burn. We’d never seen it. But now I know. We’re saving up for another chest freezer ASAP.”

The other factor is total area and poundage: to avoid ice crystals forming while you’re first freezing the meat and getting a really good start on a dandy freezer burn, optimum storage temperature is zero to 5 below Fahrenheit. Optimum freezing time: within 24 hours. Optimum amount of room temperature meat at 0-5F below to get that done? No more than 1 ½ pounds of meat per 1 cubic foot of freezer capacity.  I’ll do the math: for the popular 15-foot freezer, that’s 22 ½ pounds of meat.

Aside from the fact that we both hunt, this is one of the reasons we have two 15 cu. Ft. freezers. Even a whitetail doe will produce more than 22 ½ pounds of boned meat, and with two freezers we can spread it around for efficient—and fast—freezing.

Of course we also double wrap in good freezer paper: cut a long enough piece, then center the meat, roll it once then twice, pressing the air out to the sides, then fold the sides up, then fold the flap to resemble an envelope flap–and tape it well.  Masking or freezer tape will hold it; clear tape tends to get brittle in the freezer and work loose.

Once wrapped, the meat gets strewn across the frozen stuff already in the freezer—or stacked on cookie sheets, or better yet, cookie cooling racks. If you set already frozen packages in the corners to space them that cold air circulates more easily.  I made a short video. Here’s the link:  https://youtu.be/_GD4H_gpcDI

It may seem like the totally wrong time of year to talk about freezer wrapping, but it’s about now that you’ll be seeing some of those lovely elk and deer steaks you tossed in the freezer last fall showing the signs. Plus, bears are starting to come out of their dens, and they have fat. Not as much as wild pigs perhaps, but fat that aficionados know is delicate enough for pie crusts. (Always excluding spring bears that have been feeding on winter kill.)

Enough about freezing.  Let’s fire up the grill!  If you don’t have any wild pig in the freezer, feel free to cube up some wild turkey or go down to Bob’s Thriftway and buy some of that commercial stuff. 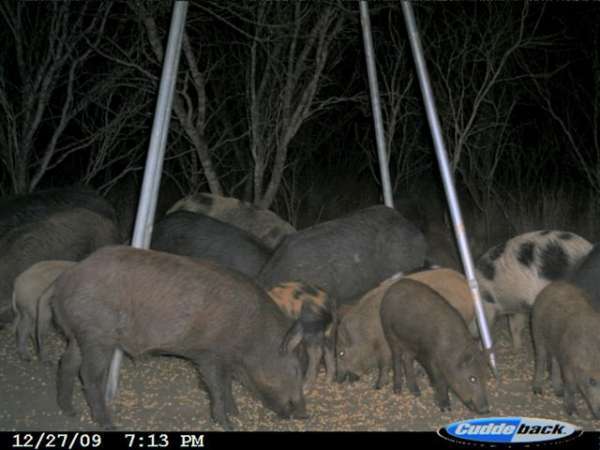 If we lived in Texas, and owned a corn feeder, we might get a bit fussier about weight and edibility, but we don’t. And sticking to the 150-250 guidelines, we’ve eaten well. We have a few errant pigs in the state—according to rumor—not the plethora in more congenial climates. I still can’t believe they’d tolerate a Montana winter, but I hear they are a problem in Canada. I guess pigs aren’t as smart as people say.

Purée the garlic cloves in a mini grinder.  Then combine all the wet rub ingredients in a medium-sized bowl, pressing the spices and cilantro into the puréed garlic with the back of a spoon to make a paste.  Roll the pork chunks around in the spice paste, drop into a re-sealable plastic bag, then place in the refrigerator 36-48 hours.

*If you’re using wooden skewers, soak them for 30 minutes before assembling the kabobs to keep them from burning up on the grill.