My fellow-foodie friend, Jeff John, who also happens to be a rifle loony, emailed me a couple of weeks ago to let me know ‘something’ was coming.  Wouldn’t say what it was, except that it was shelf stable.

A surprise! How very cool.  When the ‘shelf-stable’ box arrived at my front door, it was like Christmas.  Feliz Navidad Everyone.  It was 2 jugs (each over 2 pounds) of fire-roasted chilies.  One mild, one medium and one hot.  We just happened to open the mild one first.  And were just blown away by the fresh, farm aroma.  What a treat in the middle of Winter 2022, the Totally-Sick-of-it Verse.

I know, if you live as far north as we do, that’s life.  But we are 30 degrees below normal, the sap was starting to flow, lateral buds fattening up, a few days of warm April weather and there might just have been some green.   Then the snow and cold hit, and they’re getting frozen. Who knows how that will affect our pear tree. And over the weekend, NOAA issued a warning for new calves just hitting the ground.

Ordinarily I’d have started a fresh batch of salsa with this first, mild bottle of chili, but soup invaded my brain, and after soup, came chili.  Chili without beans.  But maybe some corn if we had some.  (We did.)

And I just happened to have some elephant garlic that was acting normal any more than our weather has been. Except in the case of the elephant garlic, it was way hotter than it is supposed to be, and that couldn’t possibly hurt a chili.  No regular garlic, except the frozen stuff in the freezer, and that’s never as good as fresh.  So just to make things a bit more manageable, I minced the elephant g. in the mini chopper and measured it.  One clove yielded 2 ½ tablespoons minced. I decided to double that.

I just happened to have a cow elk brisket thawed, plenty of meat for a pot of wild game chili, and still have some left to make tomorrow what I’d planned for it today.  So plans for that changed.  Which is why in the end, this is an Off the Cuff Chili.

So, one more word about Jeff John’s gift.  I made this wild game chili twice, in two days, and found that I much preferred those fresh chilies added just before serving.  When I let them cook a while with the meat and onions, in the first batch, most of the lovely freshness dissipated.

A word about the spelling of ‘chile’ on the Young Guns jug.  There’s a lot of different opinions about the spelling, but what I finally settled on was that chili is a pepper and Chile is a country in South America.  The dish with or without beans, is also chili.  The plural being chilies.  My sources say only the country is spelled with a final E instead of an I.  For my own writing I’m going to stick to that unless I find a more reputable source than I’ve already read.  In the meantime I’m not going to argue/correct/chide Young Guns, because their ‘chile’ is great. 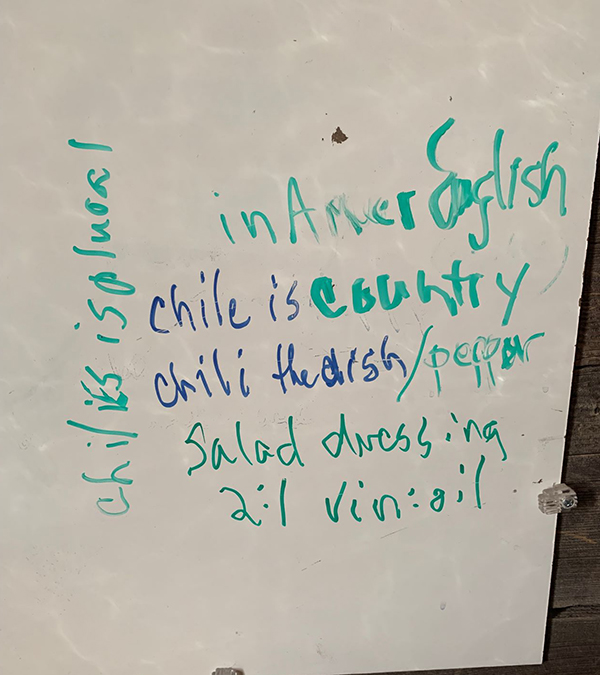 I spent hours researching the spelling of chili before writing The Wild Bowl–since more than 25% of the recipes are chilies. I just wanted to get as close to right as possible. Seems like everyone has a different opinion, including the Young Guns folks who’ve been growing chilies for years, perhaps generations. But, here’s what I came up with, no offense to Young Guns. Chile is the country, and only the country. It has an e at the end and a capitol at the beginning. For every other use, it’s chili. In American English, which is what I speak.

This is a pretty quick dish, if you have tender meat.  I timed it last time I made it, and using a mini-chopper to make fast work of the onion and garlic, I had a bit over 22 minutes into it as I added the final ingredients. From there, it’s just a matter of letting it cook long enough to get the flavors mixed.  If you don’t have tender meat, make the chili in an instant pot, set on ‘stew.’  That will tenderize it.  Or brine the meat overnight-48 hours, depending on toughness, in 2 cups water, 1 tablespoon brown sugar and 1 tablespoon salt. Multiply that brine ratio as needed.  The last time I made this chili, I knew I had some mildly tough meat, and needed to cook it right now, so no time for a brine.  I just cut the meat into very small chunks and let the chili cook about 45 minutes.  It was fine.  Chili should be a dish you can throw together, and this one is.  Of course it helped that Jeff sent the chilies. Their website says Young Guns Hatch Valley Chile and their other products are available at Wal-Mart, Albertsons and Safeway among other stores, but here’s their website:  (younggunsproduce.com) And to see what a rifle loony Jeff John is check out his website: Art In Arms Press (jeff-john.com)

Brunch in a Cup
Scroll to top