The very first post I did on this blog was 2 years ago—and it is still one of my favorites: Corned Venison and Irish Potatoes. This year I wanted to create an Irish breakfast, but when the sausage-making fairy came to our house this year, she brought a bouquet of basil and a jar of marjoram.  Well, and garlic too.  I now have lots of Polish sausage and fresh Italian sausage in the freezer, and we’re going to make a trans-cultural Irish breakfast. 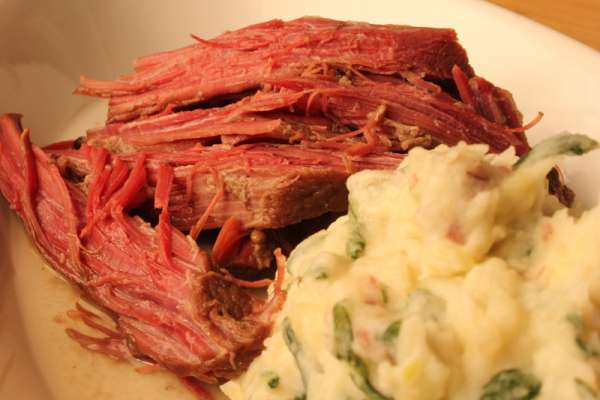 Corned Venison with Irish potatoes, formally known as Colcannon. I had many versions of colcannon while in Ireland, but this one is my favorite. (I even saw colcannon in the frozen food section of convenience stores.) For the traditionalists, here’s the link to the corned venison recipe.https://www.riflesandrecipes.com/wild-game-recipes/corned-venison-brisket That covers you for dinner. If you’d like a trans-cultural breakfast as well, keep reading

FYI, the Polish and Fresh Italian are just 2 of the 73 recipes in my book Sausage Season—50 of which are venison sausage recipes which easily can be bear sausage recipes as well. The rest are upland bird, waterfowl and wild pig sausage recipes.)

So, make this sausage.  When that’s in the fridge, make a loaf of my Irish Brown Bread (it follows, but is also in The Wild Bowl, with a recipe for Corn Dodgers as well) or your own favorite soda bread.  (My Brown Bread is just as easy as soda bread: no kneading, and a 20 minute rise.)

From there all you need is some hash browns, stewed tomatoes, a jar of jam, a nice pot of tea and a bunch of people to tell stories as you leisurely eat.  It’s the people and the stories, more than the pot of tea, that make this a fitting breakfast for St Patty’s Day  Slante! 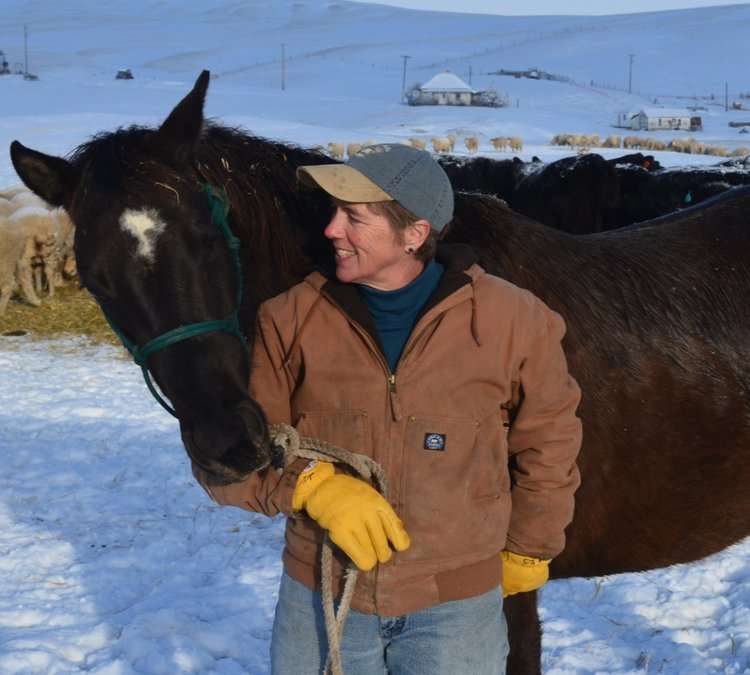 My friend Lisa and her friend, Meatloaf. If you don’t have any game meat in your freezer, consider A Land of Grass’ Montana grown and organically-raised beef and lamb. Lisa Schmidt not only raises and sells the meat (in whatever cuts you want) but also sells the wool, both in finished products like socks and blankets, and as straight wool for you to create your own products. Check it out:
https://www.a-land-of-grass-ranch.com/buy

If you have a copy of Sausage Season, you’ll notice this is a slightly different mixing method.  The egg and baking soda, allied with the salt, break down the proteins in the meat and make meat and fat bond more quickly—in 2 minutes rather than 6—while mixing in the stand mixer.  That shortened mixing time doesn’t add as much heat to the mix—and heat will break that meat to fat bond so you don’t have to chill the meat to 28°F before mixing.  It saves time, and works almost as well as the method in the book.  I still prefer the method in the book partly because I like its paleo nature, but also because it keeps the ingredient list simpler.  Scroll down for the Irish Brown Bread recipe.

In a large bowl, combine the water and baking soda and stir to dissolve. Once it has dissolved, add the beaten egg. In a small bowl, combine the spices. Now add the meat and fat to the egg/baking soda mixture, sprinkle the spices and garlic over it all and mix thoroughly.  If you own a KitchenAid Classic, 2 minutes will give you the wasp nest effect.  (See photo)  The Classic works on this smaller batch of sausage because the bowl is slimmer at the bottom than later, more expensive models, so can beat the bonding in more efficiently.  You can also do the mixing by hand, using a bread-kneading stroke, but it will take a bit longer to get the wasp’s nest.

To taste test:  before adjusting the flavors, chill the mixture 8-24 hours to let the flavors fully develop, and the salt work on the meat protein (myosin).

Once chilled, microwave a ½-inch ball of sausage in a cup for about 20 seconds on high, or fry a small patty until all the pink is gone.

For patties, cook on medium low in a cast iron skillet turning once after the first side has cooked long enough to not fall apart.   (This takes four to five minutes, but you can see when it’s ready to turn if you look at the bottom edge of the patty.  It will be a rich brown color.  So put the spatula down and set a timer, then check with your eyes before you start fussing with the patty.  This method will also keep you from having your ground venison burgers fall apart—even if you’ve added no fat.)

Cook until the pink is gone from the middle. 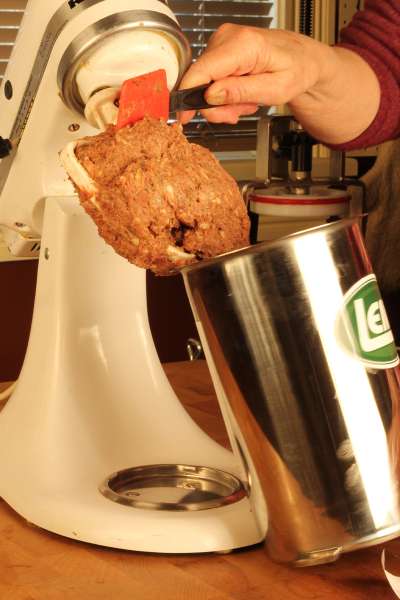 The Wasp’s Nest: However you mix sausage, it’s not sausage until you get this bond. The sausage on the mixing paddle will hang there for a very long time, unlike straight ground venison which is falling off the beater before you even lift it above the bowl. If you case the sausage, it also bonds to the casing. It’s not just ‘somewhat sticky’ as expensive charcuterie books I’ve bought suggest, it’s downright stuck.
The odd thing (or maybe not so odd given the charcuterie books) is that when I buy commercially grown and packaged pork to develop recipes, it needs no mixing, no salt, no nothing to create this bond. And whatever the label the processor adds to the package, they don’t list anything but the meat as the ‘ingredients.’ But something else is in there. It just makes me wonder. And hunt a little harder out in the woods. My beef-loving Mom once asked me “How do you know where they’ve been?” of my freezer full of game. I know where my wild meat has been, and what’s in it and what’s not. I don’t think she could say the same of her beef.

When John and I got to hunt in Ireland, we loved the hunting and our hunting companions. The highlight of every day was to sit around the table with our new Irish hunting buddies and eat, drink, tell stories–tall and true–and laugh. Scrumptious bakery goods were everywhere but, to my surprise, my favorite was the coarse brown bread we had for breakfast each morning.  At home, I searched my cookbooks for something like it, and found it in James Beard’s book Beard on Bread.  But.  The more I made it the shorter the cooking time got, to the point it was almost half.  Then one day I decided to add a bit of moisture, really own the recipe. I substituted  ½ cup sour cream for the same amount of water. It was wonderful. I took another stab at moisture last year and traded the sour cream for unsweetened apple sauce.  It’s now practically perfect in every way–and a very simple recipe, taking less time to make than a batch of corn muffins. Fresh out of the oven it’s delicious with any soup; a week later, toasted, it’s still delicious with any soup–or Skippy peanut butter. When you raise the bread, set a timer for 15 minutes and check on it.  If it’s anywhere close to ⅓ risen, get the oven started. Let the bread slop over the sides and it will be hard to get out of the pan. PS: * I’m baking at 3842 feet above sea level. If your elevation is much different, I’d check King Arthur Baking’s site for changes.  https://www.kingarthurbaking.com/learn/resources/high-altitude-baking

3.  Put the dough into a greased 9x5x3” bread pan, cover with a light kitchen towel and let it rise about ⅓ in height. Check in 15 minutes, to allow time for the oven to preheat.  Preheat the oven to 400˚F, and bake about 26* minutes. Remove from the oven, tip it out of the pan and tap on the bottom of the loaf. If it sounds hollow, it’s done. (You might need to run a table knife between the sides of the pan and the bread to release it.) Place on a cooling rack until cool to the touch.  Enjoy!

Wild pig, a stick, and fire. Anyone need a rub?
Scroll to top