In the last blog post I offered a tasty spread with cream cheese and spices to fix overcooked meat.  But there’s another way to grasp delicious out of the jaws of overcooking.  I’ve called it two things in my wild game cookbooks and it is both of those two things: The Backwards Marinade and The 5$ Solution.  (Of course that $5 may be seven or eight now, unless you are a garage saler. But that’s another issue.

I’ll explain. Marinating backwards involves a marinade applied after cooking not before.  And the $5 is for a small, cylindrical, thermos container. Together, there’s a 10th grade science lesson. And no you don’t have to dissect a frog. But you do need a chilled bottle of salad dressing. And I’ll add more specifics to that in a second. First let’s talk about marinades.

The first thing someone is saying is that cooked meat cannot be marinated. But that’s where that thermos bottle comes in.  When you take hot meat, and place it in the thermos bottle with a cold marinade, you create a vacuum.  The meat inhales the cold liquid faster than a power marinator set on high speed. 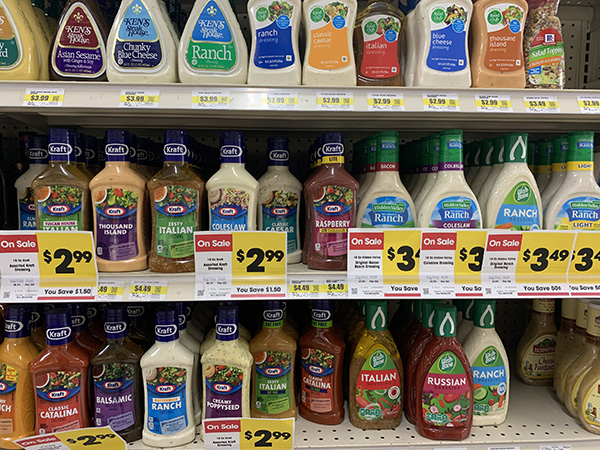 Don’t use a dairy-based salad dressing. No creamy Italian or Ranch for instance. Also, don’t use one with lots and lots of big chunks of stuff. All that takes longer to penetrate the meat and slow isn’t what you want. If you can’t almost see through the bottle of marinade, it will slow down the penetration, and you want the moisture and fat of the dressing to saturate every millimeter of the meat. And do chill the dressing in the fridge prior to using it.

While I usually recommend that people who like their game meat cooked well done always use a moist cooking recipe for game, a lot of those well-done people still cook steaks and roasts past medium. Or just until really most sincerely dull gray inside. That only reduces the moisture in the meat, which concentrates any gamy flavors, ending up with someone saying, “I don’t like antelope,” or “I don’t like mule deer” or any game meat in general–without “wrapping it in a slice or bacon or three.” And not really understanding the basics of choosing a recipe for the type of meat you’re cooking.  (The same is true of beef. Back when I was in college, one of my friends invited John and I to his parent’s house for dinner.  His Mom had bought an expensive cut of beef, prime rib, then cooked the heck out of it.  Now beef doesn’t have ‘gamy’ flavors to worry about, but that was the driest, chewiest piece of red meat I’d had in a while.  The forkhorn whitetail boiled in water and coffee grounds is still number one. But that prime rib of beef is definitely a very close second.)

Sometimes wild meat gets overdone, and it’s not your fault. Maybe you like medium to medium rare game meat, even rarer as John does.  But the cooking just took second place to life, and now it’s overcooked. Don’t panic: It’s fixable.

Or maybe you don’t want to even overcook the meat to check this backwards marinade out.  That’s okay too. As long as the elk roast, Canada goose, mallard, or whitetail tenderloin  is hot from the grill or oven, it will work.

Start with the 1-quart thermos bottle. Then check that the cut of meat that you’re going to cook will fit in it.

Then, while it’s still hot, with tongs to protect your fingers, stuff it into the container.  Pour the whole bottle of salad dressing on top, then close and seal the lid.

The type of salad dressing matters, a little.  If this is a cut you’ve already seasoned, stick to the same sorts of flavor when you choose a backwards marinade salad dressing: Italian with Italian, Latino with Latino, Carib with Carib, etc.

Second, do not use a dairy-based salad dressing. No creamy Italian or Ranch for instance.  Also, don’t use one with lots and lots of big chunks of stuff. All that takes longer to penetrate the meat and slow isn’t what you want. If you can’t almost see through the bottle of marinade, it will slow down the penetration, and you want the moisture and fat of the dressing to saturate every millimeter of the meat.

Third, the colder the salad dressing the better the vacuum and penetration. I used to always keep a bottle of dressing in the fridge just for this purpose.  Taking it directly off the un-chilled grocery shelf won’t penetrate as fast or as deeply. 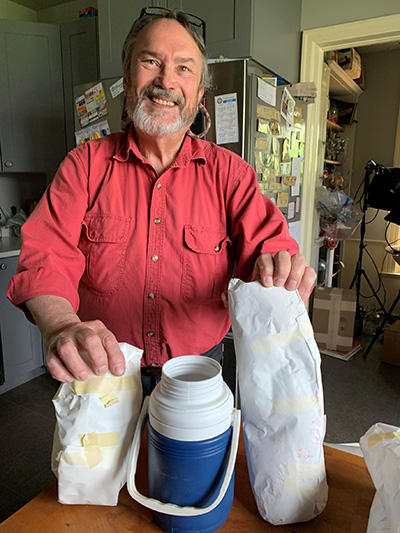 Start with a wide-mouth, 1-quart insulated bottle. Then check that the cut of meat you’re going to cook will fit in it. A whole pheasant will fit, even though that frozen pheasant package John’s holding in his right hand looks too big. But the one at in his left hand, definitely won’t fit. A cooked pheasant or elk roast will bend a bit; but not that much.
Here’s a link to a typical wide-mouth cooler:
https://www.webstaurantstore.com/igloo-legend-1-qt-blue-insulated-portable-water-jug-41614/4260004

I have a little jar next to the oven, with some essentials:

I keep a second meat thermometer for testing the final temperature.  I do not put the first thermometer back into the cooked meat, just to keep from introducing raw juices into it.

There’s a lot more about roasting venison in Slice of the Wild, including a table for dry roasting venison both in the oven and indirectly roasting venison on your grill. The in-the-oven sector includes 2 different cooking temperatures.  One for speed freaks like me who don’t have a lot of distractions, but are always worried about being late, and a lower temperature for cooking game at a leisurely, and more forgiving pace.  FYI: it’s not the weight, it’s the height. All is explained in Slice.

And there are several roasted elk, deer, and antelope recipes in that book, for the people who like their meat well done—or just fall apart tender.  Slow moist cooking in an oven bag with roasted with sour cream and bloody Mary mix?  An elk rib recipe with beer and barbecue sauce? Oh, and there are also dry grilling venison roast recipes indirectly on the grill, for those who like a medium rare backstrap that’s tender top and bottom.

Do you own a good, easy to operate meat thermometer, or two? Yet?

Since wild game meats, whether venison, bird, bear or pig, are lower in fat than commercially grown meats, keeping track of cooking temperature is essential. And just like anything else, you can spend a lot for a meat thermometer or just a little.  My preference is for simple, which almost always translates to little.  My OXO meat thermometer is an instant-read, with no bells or whistles, and cost about $10.

You may want something different.  But it’s good to know what’s available. I recently read this review, and while I don’t agree with this reviewer’s pick for the very best meat thermometer, I did enjoy the thoroughness of her search.  Seems there are leave-in meat thermometers now with (literally) bells and whistles to alert you to a perfect finish.

If you’re looking for something better than you have on hand, check this out:  5 Best Meat Thermometers – May 2022 – BestReviews

How to Cook Wild Game Perfectly