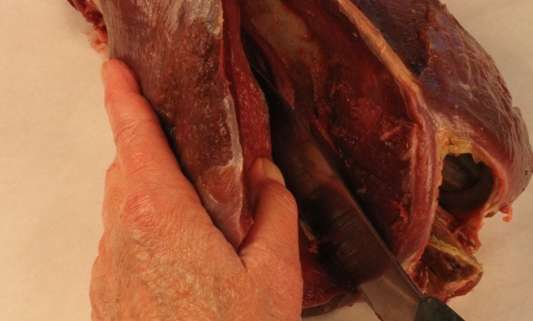 Picture it: You’re in a duck blind at 20 below, the wind is howling, and the snow is coming in so hard sideways it’s pitting you left cheek.  And for lunch you have a cold sandwich, coffee, and a handful of Oreo cookies.  Wouldn’t you rather have a hot thermos full of stick-to-you-ribs chili  made from the very birds you’re hunting?  Talk about following through. But beware: this chili is guaranteed to warm your belly.

This is a delicious and easy goose or duck chili recipe. But it pays to have tender waterfowl.  Did you shoot some tough old birds?  Kill them at a lodge that processes and flash freezes them while they’re still in rigor?  (We’ve done that.  More than once. It’s handy, but the birds would have been more tender if we’d aged them.) Maybe now you’re thinking you need a marinade for ducks? Or a marinade for geese?  The easiest thing to do is to cut the meat off the bone and in as small a piece as your waterfowl recipe calls for, before marinating it. Why?  It takes 24 hours for the marinade to move ¼ inch….  The smaller the pieces you marinate, the faster you can cook.

So what’s a good marinade for waterfowl? Let’s start with the easiest, buttermilk.  Between the acid and the (may I say, dullness) of milk, you get the tenderizing and mellowing in one ingredient.  Just allow 24 hours for each quarter inch of penetration needed.

I always find waterfowl has a slightly bitter almost burnt flavor—even when cooked delicately to rare, so I like a pineapple juice marinade, unless the pineapple would conflict with the flavors of the dish. In this case they wouldn’t. Thing is, canned pineapple juice is a great, fairly swift marinade, but fresh pineapple is not good. It’s so acidic it’s almost atomic in its power to break down collagen.  And easily gets out of control. Canned pineapple juice works much more predictably.

For this specific recipe, you could just combine the spices included: salt, oregano and cumin.  Then dust the meat with the spices and let them marinate in the fridge 36-48 hours. (For a really mature, tough bird, I’d also add the red wine vinegar.) And of course don’t rinse the meat or toss the marinade. You’ll need those flavors for the pot. (Pull the meat out of the marinade and place in a sieve over a bowl–to collect the juices. Let the meat dry there a bit before browning it–so it will brown and caramelize rather than steam.)

This recipe appeared originally in my Duck & Goose Cookery book published by Ducks Unlimited. But it’s now out of print. But Tenderize the Wild has an entire section of goose and duck recipes and every one of those recipes comes with a dry rub, brine, or marinade.  Marinades  for  geese, marinades for ducks, marinades for venison.  And I’ll be including this recipe, with a few tweaks since I never make anything the same way twice, in The Totally Wild Bowl, nothing but soups, stews and chilies, out for Christmas 2021.