I just posted a series of short videos I took while John and I prepped two white-tailed does for the butcher table. The animals have already been field dressed, skinned, and hung in the garage, aging for a few days.  Whitetail doe meat is very tender though, of the two deer, one was a yearling and one a much larger mature animal. The mature deer didn’t need a lot of help, but we took them on the last Friday of a long hunting season, and were pretty darned tired. (The deer too, but mainly us.) A few days would ensure that we’d have lots of tender game meat in the freezer. It’s now time to separate the front quarters and hind quarters from the carcass, fillet the backstraps and head to the kitchen.  (We always take the fillets/tenderloin—the bit of so-tender meat tucked up around the back end of the spine inside the body cavity—as soon as we hang any game animal. That chunk of game meat was already in the freezer.)

But before you watch the videos, or after you watch them if you prefer, I’d like to clarify a couple of points. First, we mention the pelvis a lot in the videos, both splitting it and the finger of bone that sticks out where the pelvis joins the spine.

We split the pelvis for two reasons. First, it gives us an opening to draw the guts through—much wider and freer than just cutting around the anus and then drawing the last 3 feet of intestines through a mouse hole.

So how does it work?

As you are field dressing, you’ll reach into the body cavity, cut the esophagus off as high as you can in the neck, then cut a notch between the hard cartilage rings so you can insert a finger or two to grasp it firmly, and draw the esophagus and all that’s connected to it down through the body.  (Cut away the diaphragm and any other tissue that attaches it to the inside of the rib cage as you go, and pull the viscera through the wide-open canal you’ve created by splitting the pelvis. (There’s connective tissue there too, so don’t just pull hard or you’ll defeat the purpose of the split.)  As you draw the guts out, you’re pulling it to one side of the body so it’s out of your way and out of the way of the hind quarter meat.

Watch all 4 videos. Then try it yourself. We talk about splitting the pelvis, pointing out landmarks on the carcass more than once, plus where and how to do it, to make it clearer. One you saw through the pelvis, you step on the legs, grab the tail and jerk it up.  That opens the gap even more.

Aside from keeping your game meat free of the stuff the intestines hold, and having that stuff marinate your game meat—and eventually on your fork–splitting the pelvis gets the hind quarters wide open so they cool down faster, rather than being so close together no air circulates between them. (Rather like dancing cheek to cheek on a hot humid night at the Amvets Club.)

Removing the head at the base of the neck helps the front quarters in the same way, but not as completely. It’s the front quarters that will sour first. Because we have always had Labs, we always have good-sized sticks in the pick-up trucks, and those sticks are useful for propping open the upper end of the rib cage to separate the front quarters better.  Depending on the game animal, a 2-3 foot long stick will do the job.  Just make sure it’s a couple of inches thick so it won’t break when you push the rib cage more open than it wants to be.

Then there’s the second point to clarify: that finger of bone that sticks out where the pelvis joins the spine.

When you fillet the backstrap from the carcass, you can’t just run your knife down the entire length of the spine, neck to tail.  Just at the top of the pelvis—where the pelvis and spine meet–you’ll run into a bone that projects 90 degrees from the pelvis.  I described it as a finger above, but it’s a bit thicker and shorter, in fact more like the last 1 or 2 joints of an adult man’s thumb.

Now a lot of people would say it’s a shame that bone is there because they’d like more backstrap. But we rather like tender roasts, and that chunk of meat that sits high on the spine behind that projecting bone is very tender, as is the meat a bit lower, and together, it makes a nice-sized rump roast, even on a whitetail doe.

Toward the end of the videos, we talk about tender chunks. For those of us who cut roasts, steaks and burger, tender chunks are a little present. Too small for a roast or steak, too big to be relegated to the grinder (and too tender for stew), depending on their size, they’re perfect for instant week-day stir fries, summer kabobs and quick-cooking wild game chili to enjoy in hunting camp.

As we say at the end of the last video, once we get the 5 Easy Pieces from these white-tailed deer, get the game steaks all wrapped and in the freezer—about 4-5 hours work–we’ll be back to the garage with fillet knives to trim the rest of the meat. In the meantime, our whitetail does are nice and cool. While it was unusually warm the day we shot those does, it was cold enough to cool them down, and the temperature plummeted once rifle season ended 24 hours later. For those 4-5 hours, we covered the carcass with a tarp to keep the meat from drying out. 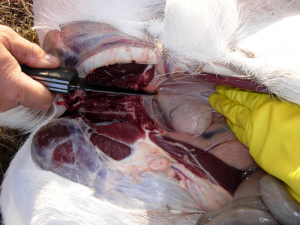 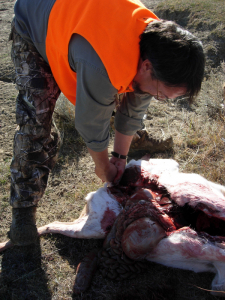 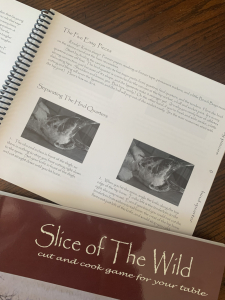 Here’s a still image of splitting the pelvis. We explain more about that in the video as John is removing the hind quarters. This still photo is from Slice of the Wild’s 60 pages of photos of game care tricks and wild meat processing. Some hunters cut lots of steaks; some prefer putting the whole animal through the meat grinder.  Slice offers options for your preferences and tricks to butchering wild game that will improve both taste and tenderness at the table. 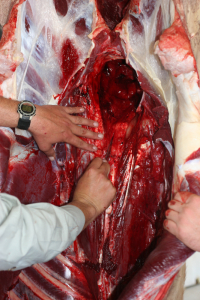 We always take the fillets/tenderloin—the bit of so-tender meat tucked up on either side of the back end of the spine, inside the body cavity—as soon as we hang any game animal. Here, it’s a Texas eland bull John shot a few years ago.  A much larger animal, the t-loins are larger as well, but it’s still important to remove them pretty soon after the animal hits the ground. They’re the smallest cut of meat, and once the animal is field dressed, they’re exposed to the air and will dry out very quickly. It’s not as much of a problem with these bigger animals, eland, moose and elk. But for smaller ones, they’ll shrivel into ill-tasting jerky very quickly. 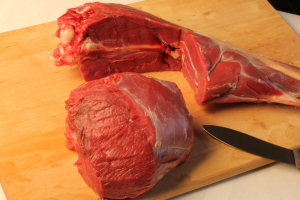 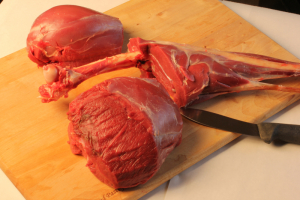 We rather like tender roasts, and that chunk of meat that sits high on the spine behind that finger of bone that sticks out from the pelvis is very tender, as is the meat a bit lower, and together, it makes a nice-sized rump roast, even on a whitetail doe.  You could even cut two—one from each side of the thigh bone (femur). Don’t like roasts? If you’re pressed for time during hunting season, cut 2 rump roasts from each hind quarter, and freeze them.  When you have time, you can always go back to those rumps, thaw them just enough to cut steaks, jerky or kabob chunks, and re-freeze them ASAP. Or cook them within a day or two. As long as you don’t thaw them completely before re-freezing, they’ll be fine.

Part 4 The Backstraps, Tenderloin and Finish