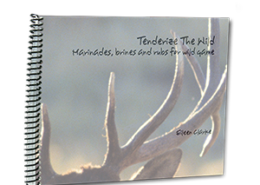 I hear it often: “Why would you want to cover up the flavor of wild game with a marinade, rub or brine?” But much more often I hear, “How can I make my game taste better and be more tender?”   Since John and I like the flavor of game, and often don’t treat our game meat before cooking, I empathize with the first argument. But, for years, John trophy hunted mule deer in the rut, while I’d rather take a fat doe.

So, we’ve had the off flavors, the gamy flavors and the bland ones. Of course, we’ve also had really delicious game meat that wanted no enhancement at all, except a little salt and pepper at the table. A mule deer buck I shot the Saturday after Thanksgiving–hard rut time–was a tender and delicious surprise, but if you’ve hunted for a few years you’ve had some of each in your freezer. Big game, upland birds, waterfowl or wild pigs, there’s a marinade, brine & rub for that. And it’s in this book.

So what are people saying? The people who’ve bought the book?  Well Ron Salladay bought Tenderize the Wild last Christmas, and he’s very happy.  “It’s been a big game changer for me eating wild game.  I’ve probably told 100 people about this book, and am buying three more today for friends.”

And then there’s this from 24hourcampfire.com:

I love her cookbooks, have learned more from them about cooking wild game than anywhere else.
–Dobegrant

Haven’t we all?
–Theo Gallus

I have learned more about cooking period.
–ClarkEMyers

Copy and paste this URL into your WordPress site to embed

Copy and paste this code into your site to embed