Blog - Latest News
You are here: Home1 / Hunting Scopes2 / Gearing Up Your Scope

Years ago, John and I both had optics columns in magazines—his in Peterson’s Hunting and mine in Woman’s Outlook.  In those days we were hunting–and traveling to hunt a lot–and ‘testing’ an awful lot of scopes.  It may sound like heaven, all that hunting in faraway places and it was, for the most part.  But, in one 18-month period, I had 6 of those new scopes malfunction, don’t remember how many John had, but not all of them malfunctioned at the range. 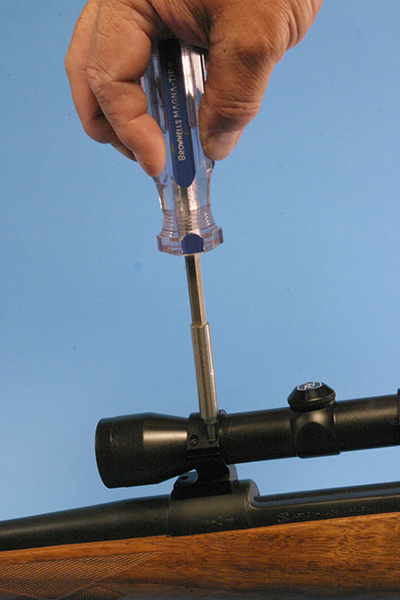 Just because you can doesn’t mean you should tighten the rings farmer tight. That tight is good for nuts and bolts on swathers and combines. Scopes are glass and fine-tuned mechanics. And of course you don’t want it loose. That’s the first thing we check when a scope’s not working reliably. Snug is good.

There was one Montana mule deer I missed completely, a springbok I creased across the back, a mule deer in Wyoming wounded when the scope suddenly shot several inches off vertically and horizontally—all after being spot-on through two sight-in sessions. (One to sight-in and a second after arriving in camp to make sure traveling hadn’t messed things up, even when I drove to the hunt.) We finished off the wounded ones, but there’s nothing more likely to ruin a hunt than leave a wounded animal in the field.

I learned two things very fast: always have everything you need to switch out a scope, including an old-reliable scope to replace the new-but-not-reliable one, plus have the tools and the know-how to unmount and mount the old-reliable along with you so it doesn’t put the kibosh on your hunt. I had to do that in South Africa with the springbok, and almost came to blows with one fellow hunter who wanted to really tighten down the scope—as John has called it ‘farmer tight.’  Keith Gradwell, my PH, later said he was about to step in.  Keith said he’d broken up fights between men and women before, but not over how to tighten a scope.

Second, always sight-in with at least one full box of ammo.  Even if you’ve used a collimator to mount the scope and you’re sighted-in right on after the first 5 shots. Why? Because there are two times a scope goes bad: right out of the box and after a bunch of use.  That’s more important with big game rifles that have some kick, but it’s almost as frustrating to have a varmint scope go bad.    Even with the highest of quality control, things happen.  So to prevent your scope from suddenly going blivit when you are shooting at that once in a lifetime buck, shoot a box or two of ammo with that new scope–as soon as it’s mounted on the rifle.  You can shoot the square if you’d like, or just shoot–but keep track of the groups.  If a scope is going to give up the ghost early, you’ll find out in 20-50 rounds.  Better to find out at the range.

And here’s a big don’t: don’t start out with a new-to-you scope on a new-to-you rifle.  Put the new scope on an old reliable rifle so you’ll know which one is more likely to be messing up.

And because I’m cheap, I always want to know that I’ve gotten my money’s worth with a new scope.  So before it even goes on the rifle, when I can still send it back for a refund, I’ll check the sharpness and brightness.

John created the chart years ago.  Here’s what he says to do, quoted from his book, Modern Hunting Optics.) There’s a printable PDF of the chart on our website. Go to www.riflesandrecipes.com, then click on the question mark at the upper far right, and enter the book’s name. (Or click on Bookstore at the upper right, then on Rifles & Handloading, and the optics book is in the second row.)  Just below the write-up there’s ‘Print PDF’ in red. Click on that. 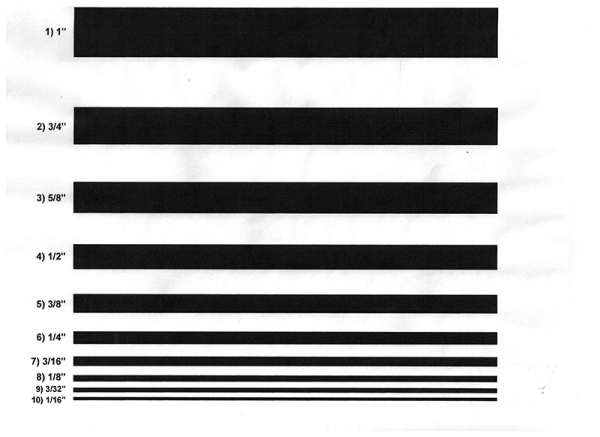 This is John’s own test sheet for gauging just how sharp and bright that new scope is. Or even if your old scope is still sharp and bright enough. There’s a printable PDF on Modern Hunting Optic’s book page: www.riflesandrecipes.com click on Bookstore on the upper right, then Rifles & Handloading. MHO is on the second row, click on it, then the red Print PDF.

Testing for brightness and sharpness:

This is done at night on a chart of my own design, consisting of alternating black and white lines that start out 1” wide at the top of the chart and become narrower toward the bottom, the last lines 1/16” wide. The chart’s lit by the 100-watt bulb on my back porch, 25 yards from the target, and also viewed from 25 yards away.

Every scope is set on 6x. This not only levels the playing field, since magnification plays a part in apparent brightness, but at 6x just about any modern scope has an exit pupil at least 6mm in diameter. This closely matches the diameter of the average human eye’s pupil in dim light, so we’re actually testing the scope’s optics, not whether the exit pupil is too small to transmit enough light to our eye. 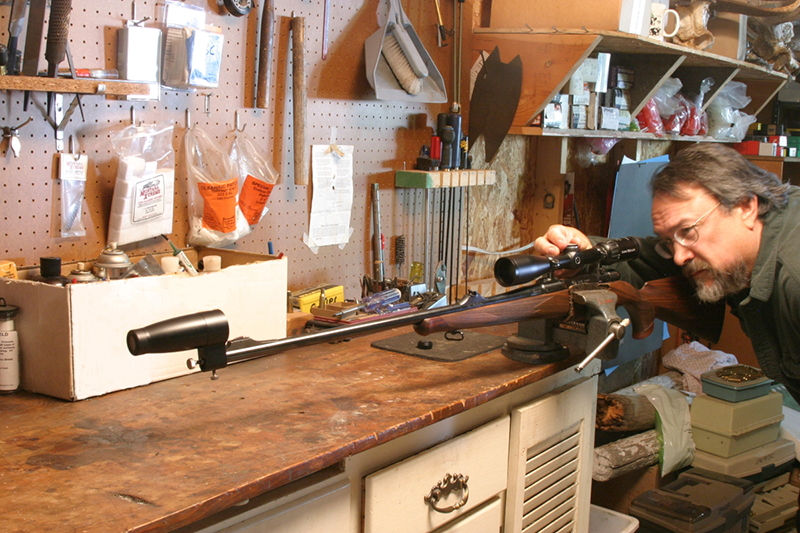 Even if you use a collimator to mount your rifle scope, when you sight-in go ahead and shoot the rest of the 25 cartridges in the box, better yet 2 boxes of 25, just to make sure your scope is tough enough, right out of the box. That’s one of the times it will go blivit.

The rifle’s then placed on a steady rest in a window, so that the light illuminating the chart doesn’t shine on the scope, and the scope is precisely focused. A scope’s rating is determined by the smallest line that can be definitely seen. All the scopes I’ve ever tested have rated between 5 and 8 (the #5 lines are 3/8” wide, the #8 lines 1/8” wide). The 5 was from an early 1950’s Weaver with uncoated lenses, the 8’s all from scopes costing $1000 or more—though some $1000+ scopes didn’t rate quite that high. A 6 is typical of a modern scope with multi-coated lenses in the $200-$400 range, and a 7 better than average. I add a plus to the score if the bottom line is exceptionally clear.

Color rendition isn’t rated, because individual eyes see color in very different ways. I’m also not worried about the field of view being a little fuzzy around the edges, because over the years I’ve noticed we aim with the center of a scope’s view, darn near every time.