A short excerpt from Gun Gack III: Once More into the Breech

Many hunters believe expanding hunting bullets vary considerably in how quickly they “mushroom,” due to how the bullet’s constructed. In reality, most start to open immediately upon hitting an animal, and how long it takes for the bullet to fully expand also doesn’t vary much (though there’s an exception we’ll examine later).

Unless they don’t open up at all, most expanding bullets fully mushroom within one to 1.5 times their own length. Most “deer” bullets are around an inch long, so are fully expanded by the time they penetrate an inch or so, but even the heaviest expanding bullets are only rarely as long as 1-1/2 inches. This means the deepest they penetrate before full expansion is around two inches. All of this has been demonstrated many times both in test media and game, even if the bullet’s “hardness” varies, but two newer kinds of media have revealed some very interesting aspects of bullet expansion.

One is clear ballistic gelatin, which when combined with modern high-speed digital photography allows us to actually watch expansion as a bullet enters a block of gelatin. Some bullet companies now include slow-motion videos on their websites.

The other was the Test Tube, made of a wax somewhat harder than ballistic gelatin. (It’s now out of production—though I still have a bunch.) The wax retained the shape of the wound channel, and when sectioned provided an interesting comparison without high-speed digital video equipment.

Here’s a photo of two Test Tubes, the top tube shot with a Nosler Partition and the bottom tube with a Barnes TSX: 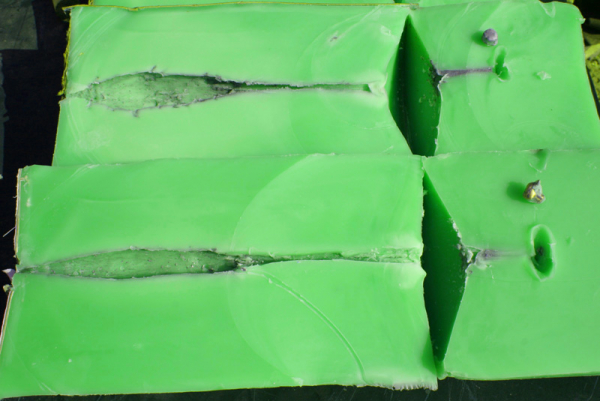 In the photo, note that the initial, wide portion of the Partition’s wound channel is thicker and shorter than with the Barnes TSX. This occurs because the Nosler initially expands wider, due to its front lead core, then loses some of the core.

The Barnes doesn’t expand as widely, the reason the initial wound channel isn’t as wide, but in test media the Barnes typically doesn’t lose any weight. As a result the wound channel remains about the same size as the bullet continues to penetrate, narrowing after the bullet starts to slow down considerably.

With both bullets, however, the initial wound channel starts to widen as soon as each bullet enters the Test Tube. This also occurs in high-speed videos—and animals. On an African safari I shot a male impala with a 286-grain Nosler Partition from my 9.3×62. The ram stood angling almost directly away at a little over 100 yards, and the bullet angled steeply into the ribs, exiting the front of the chest. The beginning of the bullet’s expansion can be plainly seen not just on the ribs but the skin.

In this second photo, the lighter “tail” to the left of the entrance hole was made as the side of the bullet skidded along the hide. When it dug in a little deeper, the soft lead point encountered the hide, and the bullet immediately started to expand. 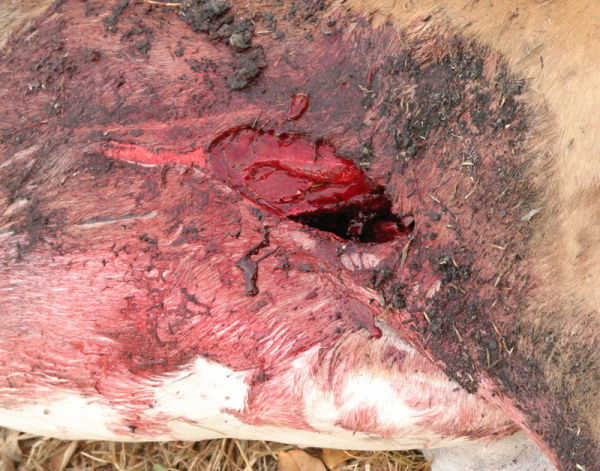 Note the similarity of the wound along the ribs to the channel from the Partition shot into the Test Tube. This initial expansion is exactly why the greatest damage done by most expanding bullets is not far beyond the entrance hole, whether to meat or internal organs.

It’s also why big game bullets expand even on pretty small animals. I once took a reproduction Winchester High Wall in .30-40 Krag on a prairie dog shoot, loaded with 180-grain Nosler Ballistic Tips at 2400 fps. Mostly I wanted to practice with the adjustable tang sight at various ranges before hunting big game that fall, and the very first dog was a typical adult, about two inches thick through the chest. The bullet landed in the chest, where I’d aimed, and while the Ballistic Tip didn’t “explode” the dog, it flopped it right over—and there was an exit hole about an inch wide on the far side, indicating the bullet had fully expanded within two inches.

Gearing Up Your Scope
Scroll to top